This is a nice impression of the plenary session we had at the end of  today’s schedule. We had a great first day, and hope you had too! See you tomorrow, thank you to everyone that attended/presented/helped! 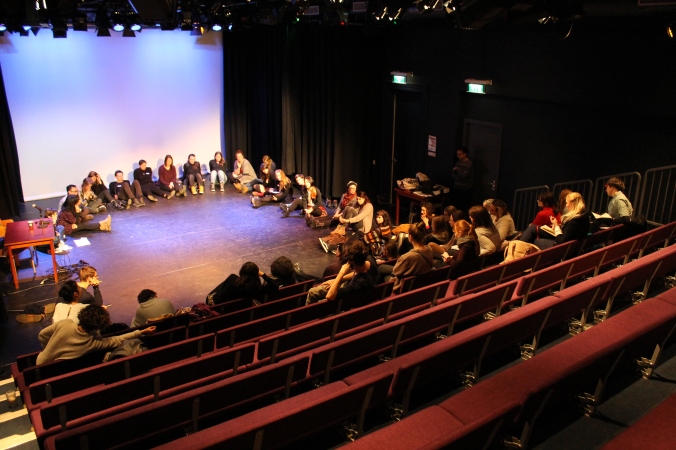 Hello everyone,
Yesterday we visited Parnassos where they showed us all of the rooms available to us the two days of the symposium. We had a lot to choose from so instead of going with the theaterroom and another big room, we are now going to have the panels in the theaterroom and the bar. Check the venue page for more information about these two rooms: LINK
Presenters: you are now able to see which room you’ll be presenting in on the conference schedule: LINK 2

We have also uploaded a food and drinks page. If you already want to know what kind of bars, restaurants, tearooms there are in the area of Utrecht check out the options on this page: LINK

There are only 4 spots left for the research workshop so if you want to participate, you’ll have to be quick: you can sign up here.

Further changes or updates will be announced on this website and/or on the facebook-event page: LINK

If you have any questions, feel free to contact us via pptheyoung@gmail.com. We can’t wait to see you all in february!

Hey everyone,
On the second day of the symposium, Saturday february the 7th, we have scheduled a research workshop. It will be an interactive workshop which reflects on the generative potentiality of free-writing, associative thinking and “dead-ends” as a key part of the research process and will be lead by Sara Epsi Jacoboson.
The workshop has a limited capacity of twenty participants. We have created a sign-up sheet on the website. If you want to participate in the workshop please sign up on the website. When the number hits twenty the sign-up page will be closed.
It is strictly a first-come-first-served policy. 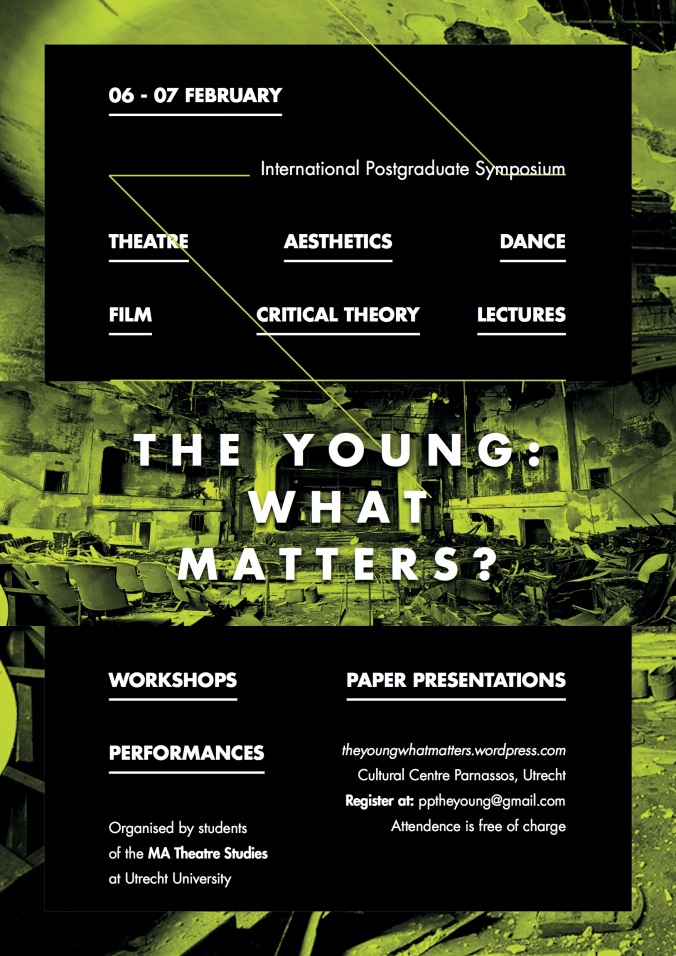 The conference schedule has been uploaded on the website (LINK) so check it out. We also created a facebook event of the symposium where all of the updates will be posted, feel free to join and/or invite your friends (LINK 2).

Do you want to attend the symposium? Please register via this website.
Do you have any questions regarding the symposium? Don’t hesitate to send us an email: pptheyoung@gmail.com

All the confirmed speakers and their abstracts can be found on this page (LINK). We are currently working hard on the symposium schedule. We will post it on this website as soon as it is finished.

We cannot wait to meet you all in february.
If you have any questions don’t hesitate to ask via: pptheyoung@gmail.com

In his essay ‘Research: The Young’ (1989), Roland Barthes refers to research processes that are based on the unity of their groups of authors, rather than a theme, and he specifically focuses on groups comprised of postgraduate students. The success of a piece of research, he posits, does not lie in its ‘result’ (publication), as is usually believed, but in its reflexive nature. Therefore, the early (more reflexive, perhaps) stages of research are not necessarily less important than the latter stages, its conclusions. To create space for the presentation of young subjects’ initial research means for Barthes to combat repressions and release not only those ‘young presenters’, the authors of the texts, but also their readers, who are similarly caught up in the division of specialized languages.

The symposium will take place on 6th and 7th February 2015 in Utrecht and will be open to the public after registration. It will include two keynote lectures, a series of student-led panels followed by responses and Q&A sessions, and a closing roundtable with the participation of members of staff from the institutions involved.

We invite students from the six institutions involved as well as from related Research MA programmes in the Netherlands to submit proposals (300 words max.) and a short bio (50words max.) for paper presentations, panels or other experimental modes of research presentation, related to the research work undertaken in the frame of their studies. More specifically, we are interested in discussing areas of research that are presently a matter of concern to young researchers (young, not in terms of age, but in terms of them being at early stages of their research).

Presentations could include, but are not limited to:

Please email your proposals or any questions to: pptheyoung@gmail.com

We aim to respond to all applicants by 10th December 2014. A provisional conference programme will be announced in early January 2015.

A research exchange platform between:

The symposium is supported by: